Find out about Wuppertal’s ‘flying train’! Have you ever dreamt of travelling in a ‘flying’ train? In Wuppertal, a city in the west of Germany, you can do just that! A so-called Schwebebahn or ‘sky train’ links the various parts of the city. Instead of running on rails on the ground like a normal train, the electric-powered Schwebebahn trains hang underneath a supporting structure. You have the feeling of flying 15 metres above the city, and the view is stunning!

The Schwebebahn might sound like a futuristic idea, but it has been around for a long time. It was opened on 1 March 1901, so it has been running for well over 100 years. During that time, it has been kept up to date with new trains and equipment. Today, the network includes 20 stations all across the city. So if you ever visit the area, why not travel by ‘flying train’? 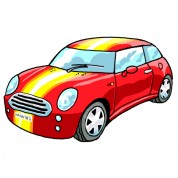