Did you know that women’s football is really popular in Germany? Germany has one of the most successful women’s football teams in the world! They have won the Women’s World Cup twice (2003, 2007) and the European Championships eight times.

The most famous female player  all of time is Birgit Prinz, the German captain, who has scored more than 120 goals for her country.

In 2016 Germany won their first Olympic Gold medal, beating Sweden 2-1 in the final.

The 8th Women’s Football World Cup took place in France in 2019. Sixteen national teams, including England and Germany, competed against each other, and 146 goals were scored during the competition. It was also estimated that 1 billion people worldwide watched the tournament. That’s a lot of people!

Unfortunately though, the German team was knocked out in the quarter finals by Sweden, who later beat England too! The USA  then went on to win the competition.

Although Germany didn’t manage to win this time round, they are still ranked second in the world! www.bbc.co.uk/learningzone
Find out more about the German football stars of tomorrow at the German side Hertha BSC Berlin!
http://de.fifa.com
The official page of the FIFA Women’s World Cup. 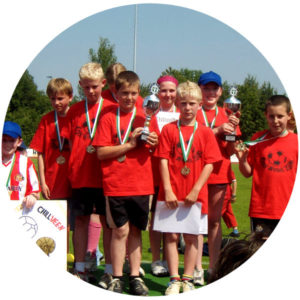