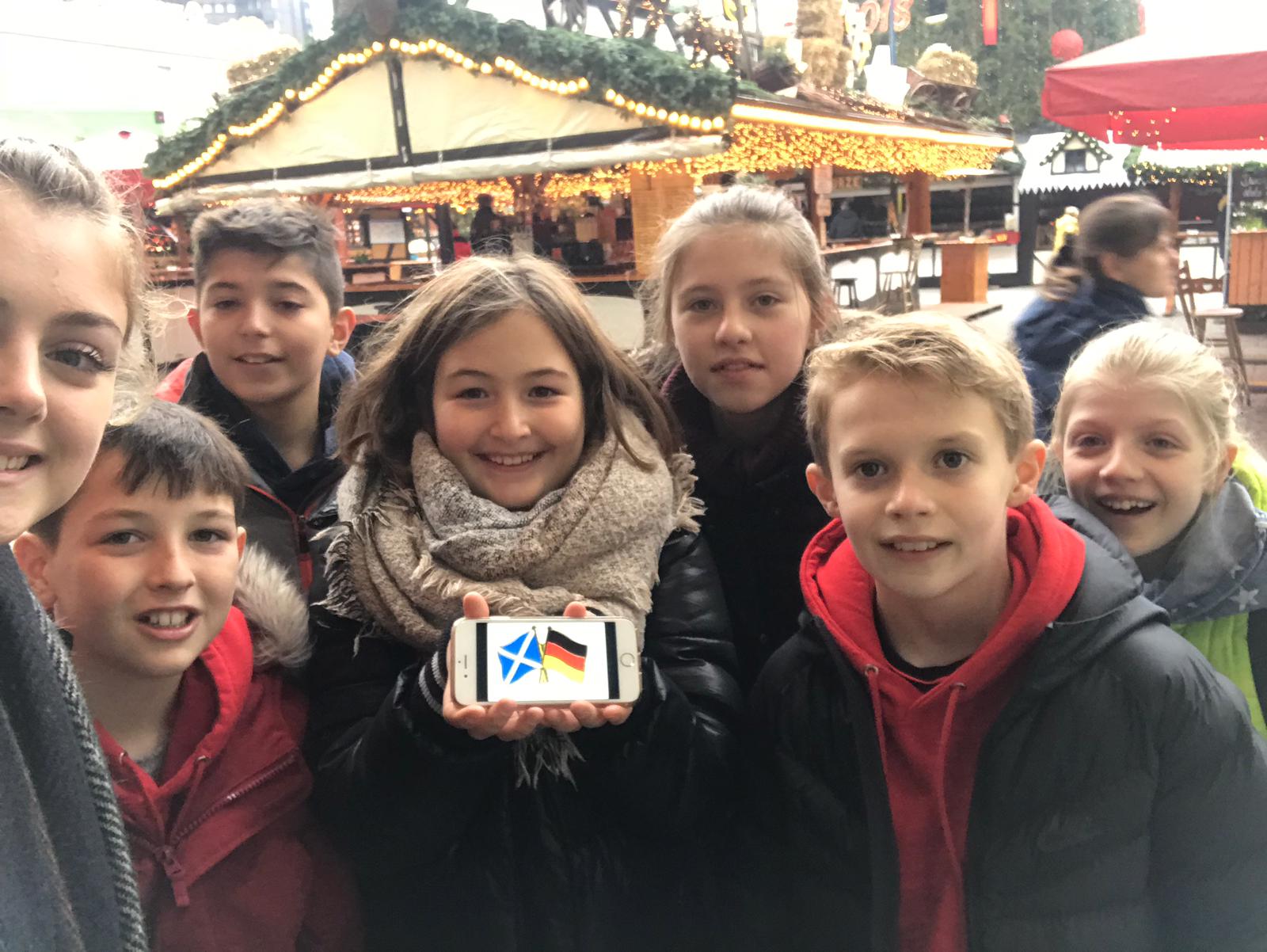 A strong partnership has existed between Wellington School in Ayr, Scotland and the Mallinckrodt-Gymnasium in Dortmund since 1990 and over the years they have run many successful annual exchanges, trips and cultural events. This year, they decided to involve younger pupils, by taking a group of primary school children on a Magical Christmas trip!

In the run-up to Christmas in 2018, fifteen very excited primary school pupils travelled all the way from Ayr to Dortmund, accompanied by their teachers and five mentor students from the senior school.  While in Dortmund, the children visited a partner class in the German school, where they sung carols, learnt to bake German biscuits and afterwards explored the Christmas markets together. At the markets, the mentors, along with the German pupils, assisted the younger children in buying gifts and of course recommended the best German foods to try!

“Singing the Christmas songs was the highlight of the day because we sang some of the songs from Germany.” Primary school pupil

Another highlight of the trip was a selfie-tour around Dortmund with various different challenges along the way. This required the children to use their language and teamwork skills, with the task of taking a photo with someone with size 46 feet proving to be a big talking point!

On the last night of the trip, the children had the chance to visit a German host family for dinner. It was clear that the children were initially nervous about this but this was soon quelled by the warm welcome they received. Every child returned from their meal, saying how lovely it had been and with gifts and numbers exchanged.

“I woke up excited but nervous because tonight we are going to someone’s house for dinner…. (and later on) The highlight of today was going for dinner at Rupert’s house. It has really good food.” Primary school pupil

Throughout the trip, the mentor students provided them with invaluable support, often drawing on their own experiences of going abroad at a young age. The mentors also gained leadership skills, along with a newly found appreciation for the work teachers do; all five students remarked on just how much head counting and organisation is involved in a trip like this!

“My highlight was seeing my group order food in German by themselves, and how proud they were of themselves, as this demonstrated to me exactly how useful being a mentor was, and what a positive impact I can have on my group’s learning and experiences.” Bethan, Mentor student

Since the trip, the Scottish children have all kept in touch with their new German friends and are hoping to meet up with each other on future school exchanges. Similarly, the five mentors were also able to catch up with old friends in Dortmund, further strengthening the partnership between the two schools. There are also plans for the German partner class to visit Scotland. Next year will mark 30 years of partnership between Wellington and Mallinckrodt-Gymnasium and both schools have planned lots of exciting events to commemorate this!

“I have learned and achieved so many things from taking part in this trip. I think my personal highlight of the trip – aside from the Christmas market food – was watching the children make friends just as I have done in similar trips; it’s fantastic to see them forget embarrassment and just talk to each other even with the language barrier.” Ruby, Mentor student