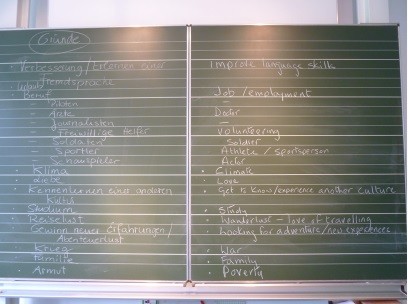 ‘What does it take to live abroad?’ This was the topic of this thematic workshop in Ortenburg. Here you can read the report from the group leader on what pupils from both countries discussed and what they discovered.

Living abroad – is this something I could imagine?

The thematic workshop provided a valuable opportunity for the English and German students to work collaboratively. The theme for the workshop was relevant in that many of the students whilst spending a few weeks in another country could appreciate some of the issues that might face someone making the choice to emigrate.

Globetrotter: where have we have travelled so far?

The initial activity, getting the students to think about how many times they had already been abroad, where they had visited and for how long brought up an impressive list of countries. This then led to group discussions focusing on reasons why people might wish to or have to move overseas. The participants came up with a broad range of answers: from improving one’s language skills to volunteering and work-related reasons to hopes for a better life and future.

Characteristics of people moving abroad – what do we assume…

The students were then presented with a list of personal qualities that might be important for someone moving to a foreign country. After matching up the German and English meanings, they then worked in mixed groups to allocate rank the most important characteristics. Confidence, open-mindedness, courage, communication skills and, last but not least, stamina were ranked at the top of the table according to German and British young people’s views.

…and what do those who moved abroad think about the topic?

These character traits were then used to create a questionnaire so that the English students and their host brothers and sisters could interview local people on why they had moved to Germany and what they believed to be important qualities. The interviews were carried out over the weekend. The results of the interviews were comparable to the young people’s initial thoughts: open-mindedness, communication skills, curiosity, flexibility and courage were the most common answers. Keeping an open mind seemed to be the most relevant characteristic for those who successfully emigrated while being courageous was the most important trait for our participants.

Why do people move abroad? And what does this mean for me and for others?

The results along with responses from the students as to whether they would live abroad for an extended time were collated and presented at the ‘Bunter Abend’ – showing that a huge number of Brits as well as Germans would strongly consider moving/living abroad for some time. Reflecting on the many reasons leading to people moving away from their native countries as well as considering their own personal qualities was a useful exercise for the students. Discussing a topic of this nature whilst also, although only temporarily, living abroad made the discussion even more poignant. In addition interviewing people first-hand from a variety of backgrounds, who are now living in Germany required courage and self-confidence on the participants’ part.