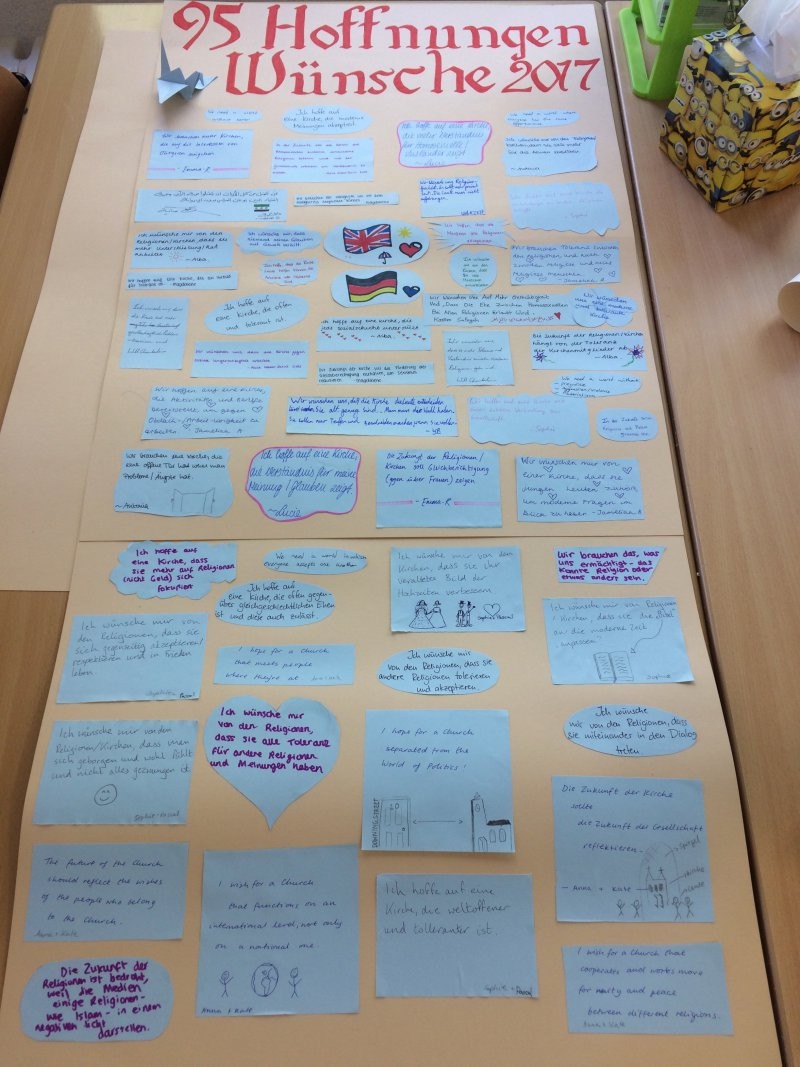 The theme of this year’s thematic workshop was ‘Religious tolerance’ – a topic that seems to be of incredible value and topical relevance. Here you can read the report from the group leader on what pupils from both countries discussed and what they discovered when coming up with 95 (!) Theses – and don’t worry, they didn’t nail them to the door of the Wittenberg Castle church.

This workshop was definitely the highlight for me of the trip. I planned the workshop with another teacher from the school, and we decided to focus on Martin Luther’s 95 Theses as our basis. We started the workshop sessions by inviting the German students involved to discuss an item they had chosen which related to the reformation. Once this had happened, we watched a short video, which explained the English reformation, and the British participants then explained (in German) how the two were different. This was a great starting point for all the participants, both British and German.

…and how this relates to the present

The participants paired off with a German student, so this was an excellent chance for the participants to share intercultural knowledge. The group had a final discussion, in which comparisons of the two lists were formed. The homework was to then discuss the church/religion with their guest families and to find out why Weimar has a low number of church members, and what critics could say about organised religion.

Creating our own 95 Theses for modern day religion

The second set of sessions brought together the themes from the first two sessions. The participants circulated, sharing what they had found out, and asking questions to the German participants. As we had looked at the 95 Theses in the previous session, the aim was to create our own 95 Theses for modern day religion. The participants worked in mixed groups of 2 British/2-4 Germans, and they created their own group of wishes for the church/religion. These were then all glued together to create our own document: “95 Hoffnungen und Wünsche 2017”.

The reason I feel this was such a highlight is because it showed a clear example of intercultural knowledge being used to promote positive UK-German connections. All participants gained a lot from this experience, and came away with solid ideas and opinions, which I know they will apply in their lives in the future. – Group leader

A project of immense impact: Intercultural cooperation towards a more tolerant world

The reason I feel this was such a highlight is because it showed a clear example of intercultural knowledge being used to promote positive UK-German connections. The participants generally all focused their wishes around the need for greater tolerance across all areas of society, especially when it comes to religion and race, and how this may be achieved in both the UK and Germany. All participants gained a lot from this experience, and came away with solid ideas and opinions, which I know they will apply in their lives in the future.