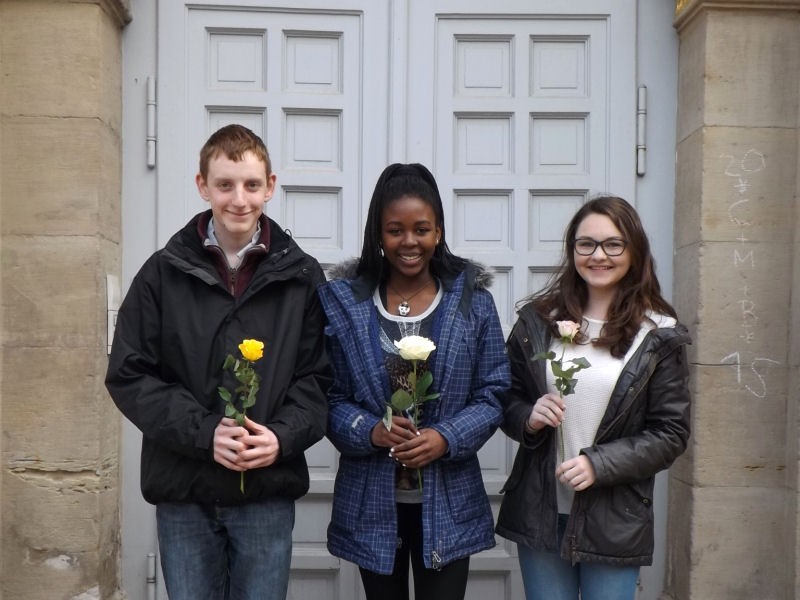 How has WWI impacted present and future relationships between the UK and Germany? New partners Abbeyfield School and Bischöfliches Gymnasium Josephinum met for the first time in Hildesheim to embark on an historical peace project to find out.

To establish their new school partnership, students from both schools started getting to know one another via email and shared their research of fallen soldiers from their local areas during WWI. The aim of the project was not only to reflect on the personal dimension of the war from both perspectives, but to also investigate the validity of Angela Merkel’s statement “Krieg ist nicht mehr das Mittel der Politik in Europa” and how the effects of conflict can still be seen in the two nations today.

During the visit to Hildesheim, pupils had the opportunity to hear first-hand experiences of four people who lived through WW2, one of whom was a former student at the Bischöfliches Gymnasium Josephinum at the time of the Allied bombing raid. Initial research into how war memorials differ in their local areas began during a visit to the Borsum cemetery, and pupils noted that names of fallen soldiers were only present on memorials in the UK. Pupils were also able to see first-hand the physical destruction of war whilst visiting the Gedächniskirche in Berlin, and from their visit to the East Side Gallery and Bernauer Straße, pupils were able to recognise that conflict can also divide a nation internally.

The trip culminated in collaborative project work: pupils spent the day at the Bischöfliches Gymnasium with their peers and compared and contrasted how WWI is portrayed in UK and German educational resources, such as textbooks. Having enriched their knowledge of WWI through first-hand insights from local residents, students were able to critically engage with the materials and information they are given at school. It also proved to be a useful professional development exercise for the teachers leading the trip.

My colleague, a history specialist, can now teach both world wars from both perspectives. He can now better answer and question the text books we use. (UK teacher).

Trips abroad have an even bigger impact on us as students if they are cross-curricular – for example German and History – as understanding is improved over both subjects. (UK participant)

A symbol of international peace

The end of the visit was marked with a symbol of international peace – the giving and receiving of rose plants. The Abbeyfield gold rose is to be planted in Hildesheim, whilst the pink rose will be planted in Chippenham as a symbol of friendship between the two towns and understanding between the two nations. The partner schools are planning a return visit to Chippenham in June to continue their collaborative historical project.