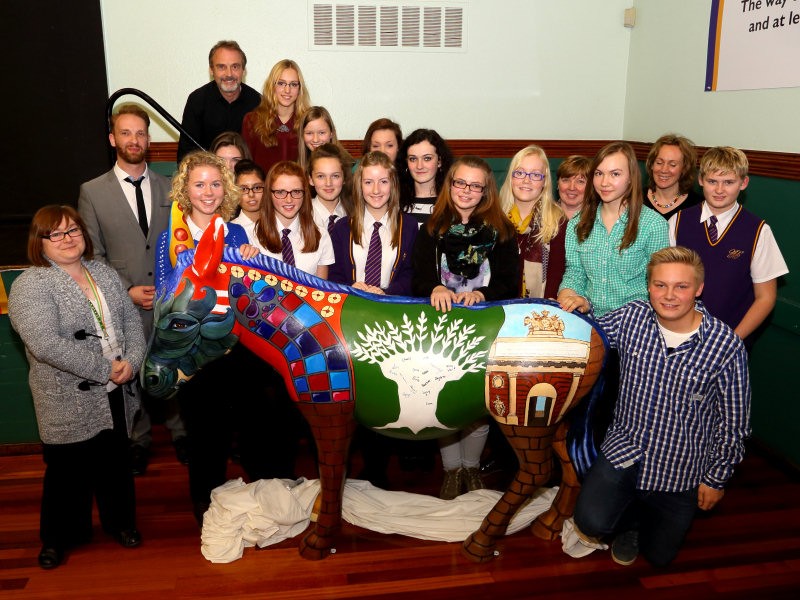 The winning teams from Germany and England met in Durham to decorate the donkey together – and of course to join the big celebration. One of the contestants reflects: „It was really exciting when loads of people came to school for us to unveil the donkey we had been working on. The Chairman came with her big gold medallion and there were a lot of important people from Germany. Everybody thought our donkey was just amazing and we got lots of photos. It was a really good way to have this big birthday party.“

The donkey project created opportunities for cultural cooperation between England and Germany. As one partaker describes, it also raised awareness for the historical importance of the link: „One attendee was a participant in the 1953 exchange and others were the youth leaders from this era. We had a great deal of fun exchanging stories about the early exchanges. The afternoon celebration event was held as a traditional English afternoon tea party – but with Bienenstich and Sachertorte.“

Reflection through art: a résumé by the UK coordinator

„For the pupils from Bishop Barrington School, whose design was judged to be the most creative interpretation of 60 years of partnership, the project really helped to heighten understanding about a different part of their continent. German isn’t taught at school and from conversation with pupils, little was known about contemporary Germany. The young people really enjoyed working with a professional artist and this was the perfect icebreaker to bring the English together with their German peers. As soon as they started to work, they began discussing colour, design etc. They quickly realised that they had to work as a team.“

„We very much hope that the school will build on these connections and run an art project with their new German partners next year. Press coverage will hopefully encourage other groups to become involved. We had a fantastic time celebrating 60 years of partnership and trust that this will provide the context for many more years of links.“ The donkey would serve as a lasting physical reminder of the anniversary and promote future discussion and exchange.