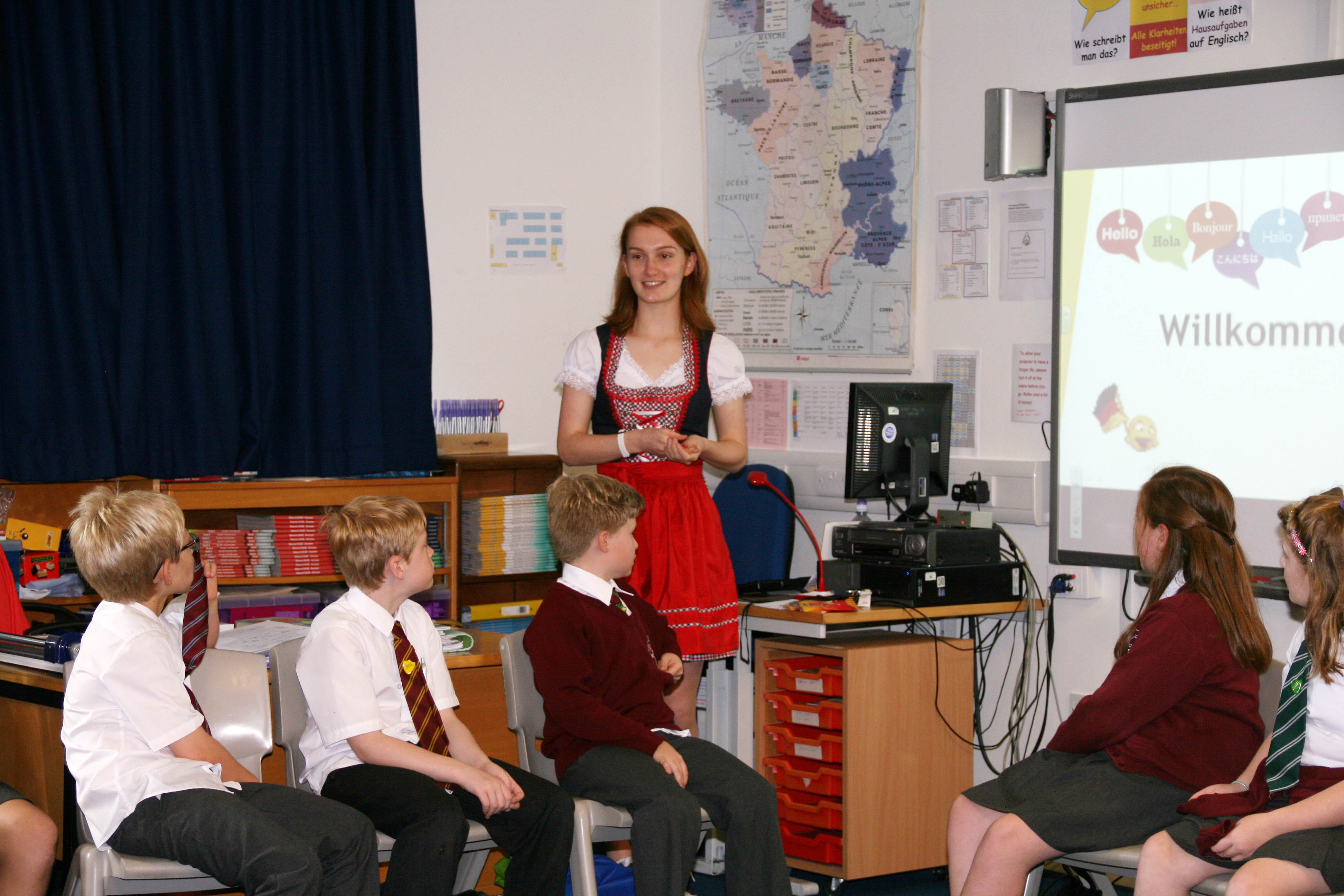 Following the German Pupil Courses, all participants take on the role of ambassadors, visiting their local primary schools in the UK to share their experiences. The aim is to widen younger pupils’ cultural understanding and inspire them to learn the language and visit Germany.

Getting started: Meeting the primary pupils and finding a topic

In June I visited the local primary school to tell them where I was going in summer. I explained that I would be attending school in Germany and that I wanted to know about Germany and German culture to help extend their learning. They were really keen and interested. I asked them all to write down a question or two about Germany in general or a fact that they would like to find out. The answers to these I would find out for them during my visit.

The largest difference I noticed while in Germany was the differences between UK and German schools, so that was what I decided to give my presentation on. I outlined the German system using a flow chart to show the different schools a child would go to. I showed them a model school day, and we were all very surprised at how short it was in comparison to ours.
Madeleine, Ortenburg

My aim with this topic was to show the children that although there were many things they did know about German there were also lots of things they did not. I wanted to challenge their preconceptions if I could, particularly because they will be making their choice of language for S1 very soon.
Kate, Weimar

After returning from Germany I began to gather resources to plan for my follow-up visit to the primary class. I made a keynote presentation about my time in Germany including lots of photographs and information on the experiences the course allowed me to have. I focused a lot of the keynote presentation on describing school life in Germany in order to answer the pupils’ original questions on the topic. In preparation for my lesson I also made a worksheet for the pupils to help them learn some German vocabulary about classroom objects, which related to my theme of school life in Germany.
Emma, Weimar

We began with navigating our way around a German map, using famous landmarks such as the Brandenburg Gate, car brands and where they are produced, football teams and places from which famous foods originated to visualise the different regions. (…) We also talked about school in Germany and the differences like how they would not have started school until they were about 7 if they lived in Germany. They were also keen to see the photos I took whilst in the German primary school to see some of the differences for themselves, and talked about Schultüten which they have decided need to be introduced in England.
Magdalene, Weimar

Overall, they seemed to learn a lot about a culture which was mostly new to them. They especially enjoyed the interactive elements of my presentation, where they got to answer questions and try things for themselves. I really hope I might have helped inspire some of them to think about learning a language in the future.
Amy, Friedrichroda

A ‘real’ insight into German

All in all I loved delivering the workshop and it was so great to see all the preparation paying off and the children really seemed to respond well to it. The teacher contacted me a couple of days later to tell me that they had all enjoyed the session and were still practising their German which was great to hear.
Lucy, Ortenburg

I received amazing feedback from the teachers who said that I had done extremely well, and my confidence had improved greatly, as I was very shy when I went to the school. (…) I truly feel that I have had a positive impact on the children and the school as they are now more aware of the history and culture surrounding Germany.
Rhiannon, Weimar

My session gave the children an insight into German culture and language. I was surprised to see that the children did not know what the capital of Germany was, which reinforced my view that the project had educational value. At the same time, one boy in particular had a very in-depth knowledge of the Bundesliga. This showed me that the best way of interesting children in other cultures is to tap into their own interests. (…) The children were full of questions about Germany and learning German which was fantastic to see. I was very impressed by their attentiveness and enthusiasm for learning.
Olivia, Ortenburg

The pupils were given the opportunity to use the (German) vocabulary given to create short conversations in pairs. During these conversations, they greeted one another, stated what their names were, asked one another how they were and where they came from and said goodbye to one another). The session was received very well by the pupils, who maintained a high level of interest and focus and asked relevant questions throughout to broaden their understanding.
Timothy, Weimar

I think the main thing I have managed to accomplish is opening a doorway with which I will hopefully be able to teach the students more about Germany. And if I get the opportunity to do so, I will definitely look forward to it as I enjoyed giving the presentation so much. I would gladly do it again.
Katherine, Ortenburg

I think my talk really inspired the children about Germany as a country and its culture. There were engrossed with what I had to say and responded enthusiastically with my questions. The German language taster I gave them really was the icing on the cake! I feel that they have learnt enough about Germany to have sparked an interest and are now more culturally aware. I think that they have definitely benefitted from my presentation as they were buzzing with excitement when I finished.
Anna, Ortenburg

Overall, I really enjoyed giving the presentation as it moved in many different directions that I did not expect, allowing me to talk about aspects of German history and culture that I find interesting. It also allowed me to use some of my knowledge that I have learnt in History lessons in school to help them understand more about Germany. Although I was initially nervous, I am glad that I did the workshop as I feel more comfortable giving presentations now. The children were very enthusiastic and welcoming, and I am glad that they enjoyed the workshop. I hope that I can give another workshop, so that the children can learn even more about Germany.
Madeleine, Ortenburg

The German teacher thanked me a few days after the presentation, saying that the children had been greatly inspired to go to Germany, and excitedly continued to talk about it even after a few lessons. I have continued to stay in touch with the school and (…) the trip has allowed the German department at my school to establish contact with the German department at the (primary school), with the intention of sharing cross-school events.
Jamie, Friedrichroda

Inspiring the next generation

The highlight of the presentation was definitely at the end, when I asked if any of the kids could tell me what they had learnt, after a range of words repeated back to me, one boy at the back of the classroom, who had been actively involved throughout the presentation, put up his hand. When I asked him what he had learnt, he replied “that I want to do German”. Needless to say, that boy received the applause he deserved.
Emma, Ortenburg

I think that my session opened the children’s eyes to a new language and culture that some of them had not come across before and through that I helped them develop their tolerance for other cultures and encouraged them to realise that experiencing other cultures is fun and also sometimes surprising. A couple of children even said that I had inspired them to study German at secondary school.
Alicia, Friedrichroda

I would say that I increased the intercultural understanding of the pupils greatly. The fact that they hadn’t learned anything about German or the culture and language helped me because I could work with a really broad spectrum and all of it increased the pupils’ understanding. I felt that my session really sparked the pupils’ interest in German and I hope the school will continue to give the pupils some insight into German culture (I’ll help!)
Ben, Ortenburg 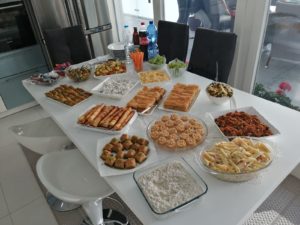 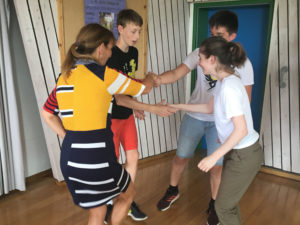 END_OF_DOCUMENT_TOKEN_TO_BE_REPLACED

I have got so much out of this course: I feel a lot more independent…