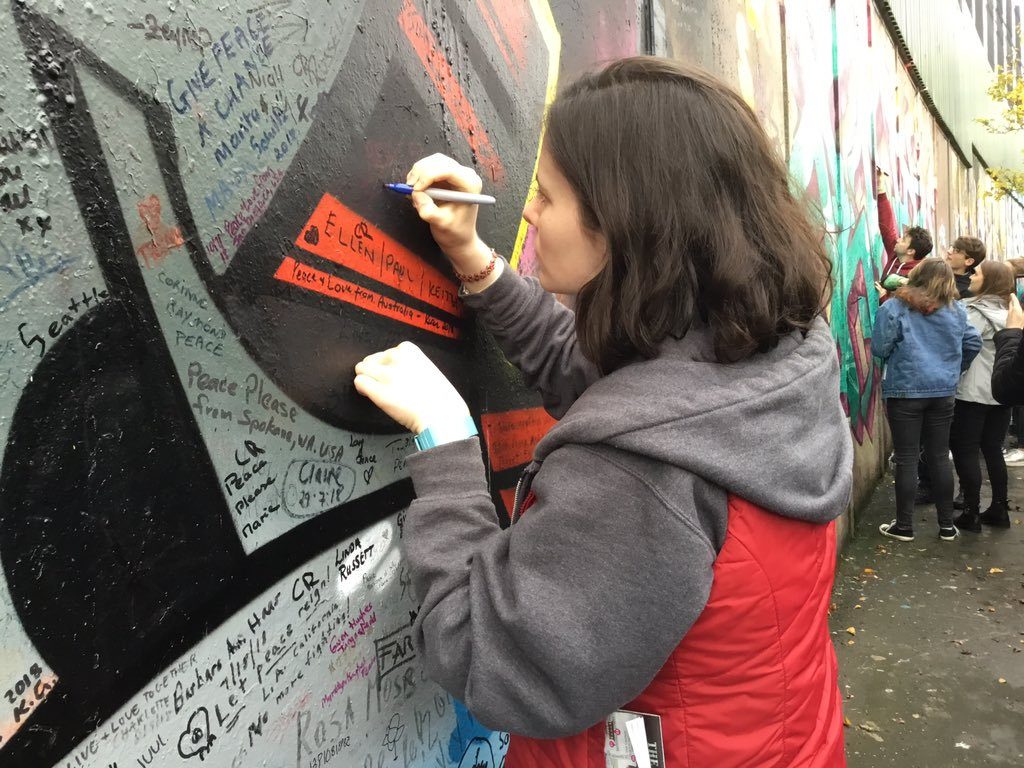 When youth workers from Cliftonville Community Regeneration Forum (CCRF) and Stiftung Sozialpädagogisches Institut (Stiftung SPI) Jugend-Team Beeskow met for the first time at a 3-day partnership seminar in Potsdam, they realised that the young people they work with and the projects they run had a lot in common! From here, draft plans for an exchange began and led to a partnership-planning visit supported by the Partnership Visit Fund

Stiftung SPI and CCRF are youth programmes in Brandenburg and Belfast, working with young people from disadvantaged backgrounds to improve their prospects through employability projects. In both countries, many of the young people have never been abroad and so an exchange was an excellent opportunity to broaden their horizons and look beyond the borders of their hometown. With similar values at the core of the youth work in Brandenburg and Belfast, project ideas flowed and the two groups shared similar desired aims and outcomes of their planned exchange.

As this was a new partnership, it was essential that both sides were able to  discuss the planning process face-to-face, allowing them to explore joint areas of interest and work with the young people directly. Two youth workers from Brandenburg travelled to Belfast to meet with the coordinators from their new partner youth group. The trip began with the chance to meet the young people, exploring initiatives and projects in Belfast and discussing possibilities for joint initiatives.

Young people at the heart of decision-making

It was clear from the outset that both CCRF and Stiftung SPI wanted to actively involve the young people  in the planning process. The young people would be the main beneficiaries of the exchange and it was important to both groups that the activities focus on their individual and unique experiences, boost their confidence and communication skills, and ensure tailored outcomes. During their trip, the youth workers spent time observing and interviewing the young people at CCRF to find out what they would like to gain from the exchange and their ideas for activities and project themes.

From an idea to a fully-formed plan

Through their discussions during the trip, details of the project were finalised and they have now decided to involve two specific groups of young people: young mothers and teenagers.

The groups also came up with a project theme: ‘Grenzerfahrungen’ or experiences of borders/barriers. With Stiftung SPI located in Brandenburg and CRRF located in Belfast, both groups are ideally situated to explore the theme from both a personal and a wider perspective. The first leg of the exchange will focus on borders between social and economic states, against the historical backdrop of a divided Berlin and the return visit will focus on cultural and social borders, such as those experienced by different religious groups in Northern Ireland. Excursions to the Peace Walls, as well as Dublin will extend the theme to the political background and the notion of European Identity. Alongside this, the exchange itself will address the relationship between the UK and Germany, challenging the young people’s notion of ‘other’ and providing them with a unique opportunity to overcome personal barriers.

Planned and ready to go

For both groups, the planning visit was a great success and resulted in concrete foundations for their exchange! In particular, the trip allowed both groups to strengthen their partnership, get to know each other and the local area, as well as providing a renewed enthusiasm for cultural and thematic exchange between the young people in both the UK and Germany.

The two youth workers from Stiftung SPI share their top tips for an effective planning visit: